Our patient treks the Himalayas on a new knee 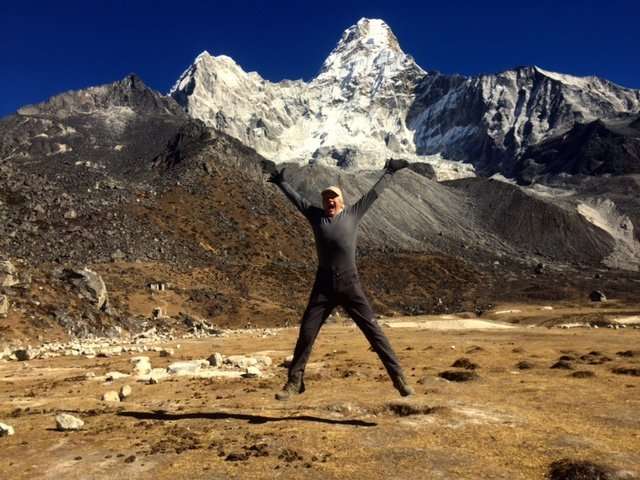 Bill, a resident of Mill Valley is living his dream by taking a year to travel around the globe with his wife.

“We were preparing for an active trip,” he said, “which included two-week treks and hiking in Japan, the Himalayas and around Machu Picchu.”

A prior injury comes back to haunt him

To prepare for their October 2016 trip they began training January. A torn meniscus in his right knee 20 years earlier had been causing increasing problems over the last several years. The additional training caused significant knee pain after each workout. Anti inflammatory drugs provided little relief.

“I knew that I was going to have problems on our trip,” he says.

“I was very impressed by Dr Mayle’s diagnosis of the issues with my knee as well as the challenges that I would face in meeting my goal of being prepared for some rigorous trekking within six months of surgery,” Bill says.

It turned out that Bill’s situation was worse than he thought, and they agreed that surgery was his best option.

“I was very impressed with the entire team before during and after the surgery,” he says. “Before the surgery not only was I provided with all of the information needed to prepare me before and after the procedure but a physical therapist met me at my home to ensure that it was properly set up to maximize the chances for a successful recovery.”

On the day of the surgery Bill was pretty nervous, but the entire surgical team made him as comfortable as possible. Within an hour after surgery he was beginning to walk again.

“It was quite amazing!”

After being discharged the next day he began physical therapy so that the post operative recovery would be as effective as possible. He was diligent about his follow up visits to measure his progress.
“I still had a lot of work to do on my own but treatment from diagnosis through post surgical support definitely set me on the road to as rapid a recovery as is possible,” he says.

At this time of this writing, Bill and his wife have done some significant trekking on their trip and are walking about six miles a day as they explore many interesting things on their journey.

“While I would not wish this sort of surgery on anyone I feel fortunate to have been in the care of he best team possible,” he says. “I could not have done this trip, or continued my life as actively, if I had not had my knee fixed by this team.”

What is a Physician Assistant or Nurse Practitioner?
Surf’s up! Avoiding injuries in the breaks